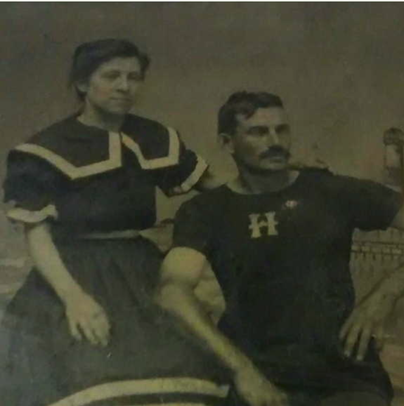 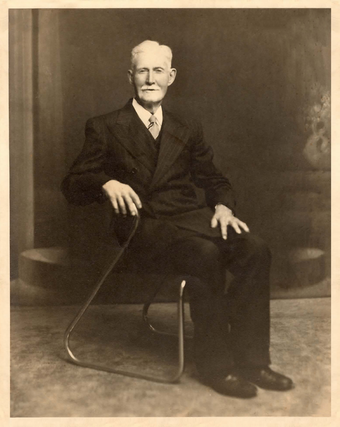 Harvey G Haines probably early 40's. The original photo was uploaded on Ancestry by Ed Huston and digitally restored by me.

Lilly was born the second of three children, and the first daughter of Benjamin Franklin Turner, Jr, 1844-1897, and Mary E Norcross, 1842-1914, in the Glassboro area of Gloucester County, New Jersey.  Her father was a glassblower, as was her grandfather, Benjamin Franklin Turner, Sr. Her family is also listed as living in Tansboro, Camden County, New Jersey when she was 10 years old.

Before she was born, her father had served in the Civil War as a Private in Company D, 24th Regiment of the New Jersey Volunteers at 18 years of age.  He served for 9 months until the entire regiment was mustered out in Jun of 1863.

She married Harvey in 1888 when she was 19 and he was 32.  I don't know of any photos of Lillian.  The only photo that I can find with Lillian is the one above as shared on Ancestry.com by Ed Huston.

​Some claim that Lilly was Native American.  I can find no evidence of that at all.

Harvey and Lillian settled in Medford, Burlington County, New Jersey and proceeded to have a bunch of babies.  Their fourth child and second son, Walter John, would grow up to marry Ruth Lenore Townsend, our grandparents.

They settled in Medford, with Harvey working as a day laborer or farm hand.  With so many mouths to feed, life must have been rough for the family.  On the 1900 census, Harvey reported that he'd been out of work for 6 months.  All of their homes were rented. In 1910 the family moved to Evesham Township (or perhaps Medford became part of Evesham Township.)

No matter how hard times got, it seems that Harvey and Lillian were good souls who opened their home to relatives in need as evidenced by the 1920 and 1930 census.

In 1930, living on North Maple Ave in Evesham Township, Marlton, their son Paul was 19 years old and still living at home.  Listed also are two "new" daughters, who These children are Margaret, 9 years old, and Lillian, 8 years old and according to Janet, her mother Naomi said that everyone joked that the children were both aunt and cousin to Mother Haines. Interestingly, it says that the two girls' mother's birthplace was New York, when Harvey's wife Lillian is listed as being born in New Jersey on the same cenus.  I will attempt to find out where these girls originated. 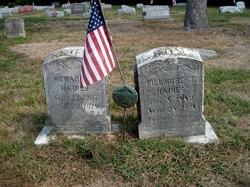 The graves of brothers Howard, 11,and Filmore, 28
Sadly, both parents would live to see two of their sons die before them and just 4 months apart, one succumbed to the Spanish Flu and the other most likely from the same thing.  In 1918-1919, the world was gripped by "The Great Pandemic," with an estimated 30-50 million perishing world-wide.  It is believed that World War I helped spread the virus with the movement of troops.

Harvey and Lillian's oldest child, Filmore T Haines, was drafted into the military and was at Camp Dix for training just 15 days before he died from influenza on 28 Sep 1918.  His younger brother Howard B Haines, the 8th of the 11 children, was just 11 years old when he died on 26 Jan 1919.   The brothers are buried next to each other in Medford Baptist Cemetery.

Lillian died in 1939 at the age of 69 years old.  Harvey died in Cooper Hospital in March of 1946.  Sadly, he lived to see the loss of his grandson to another great war, that of World War II.  His son Walter's son, Walter James Haines, was listed missing and declared dead in the Phillipines on 12 March 1945.

Harvey was a direct descendent of Richard Haines and Margaret Leeds, the progenitors of the Haines family in Burlington County, New Jersey.  They came as Quakers, members of the Society of Friends, famous for denouncing war.  Sad and strange that their descendant would experience at least two deaths in his own family due to war.

It has been reported that Harvey and Lillian are buried in Medford Baptist Cemetery.  I searched, along with my sister Helen and my daughter Chelsi, but we did not find them.  I will search again sometime soon.