William was born the youngest child and third son of Jonathan Haines and Ann Bradley Harvey in Evesham Township, Burlington County, New Jersey. Unfortunately not much else can be found about William's family except that he was born and raised on a farm in Evesham Township.  It's unknown whether his parents were still members of the Society of Friends (Quakers).

There are plenty of Pettit families in Burlington, Salem, Hunderdon, Cumberland, and Gloucester Counties in this time period.  There are even families right in Medford and Evesham.  I'm searching for the definitive link for Elizabeth.  This surname is also deeply rooted in the part of New Jersey's history.

They married in 1847, when he was 26 and she was 19 and settled in Medford.  In 1850, they have their first child, 2 year old Joseph, and William is working as a "Turner," a lathe worker.  The family moved around quite a bit so it would seem to indicate that either William's skills as a turner were in demand or keeping a job was a problem for some reason.

Ten years and six more children later (1860), the family is living in Southampton Township, with William still working as a Turner.  His net worth is declared as $50.

The couple didn't stay there long however, because in 1870, we find them in Upper Pittsgrove, Salem County, New Jersey, where William is once again employed as a Turner, and their son G. Harvey is 12 and William 6.  Ida, their 17 year old daughter is recorded on the census as being Ida Smith, married, and mother to a 3-week old baby named Mary J Smith.  There is no Mr. Smith living with them.

In 1880 we find the family in Booneville, Oneida County, New York with William still working as a Turner, Elizabeth still "keeping house" and their son Willam, now the  last of their children living with them, working as a "boatman."  Their neighbors in New York are the Dare Family, their daughter Ida and  Isaiah Dare.  By 1890, the family is back in Southampton Township in New Jersey.  Their son Filmore marries Emiline Dare later.

(As a side note, their next door neighbors are Sam Adams and the Adams Family - no, not THE Sam Adams.)

The Death of William Ashley Haines 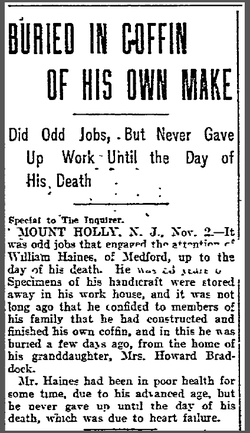 BURIED IN COFFIN OF HIS OWN MAKE

Did Odd Jobs, But Never Gave Up Work Until the Day of His Death

Special to the Inquirer
MOUNT HOLLY, N. J., Nov 2 -- It was odd jobs that engaged the attention of William Haines, of Medford. up to the day of his death. He was 83 years old. Specimens of his handicraf were stored away in his work house, and it was not long ago that he confided to members of his family that he had constructed and finished his own coffin, and in this he was buried a few days ago, from the home of his granddaughter, Mrs. Howard Braddock.

Mr. Haines had been in poor health for some time, due to his advanced age, but he never gave up until the day of his death, which was due to heart failure.