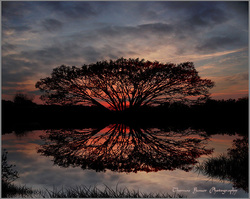 Our tree branches off into two lines, then back into one.  That's because we are descendants of two of the original Haines brothers in New Jersey, John and Thomas.  It goes back into one line because their descendants married each other.   The charts below may help you to follow the line.  We are also descended from multiple Sharp brothers, Borton sisters, and three of the Austin siblings.  This makes it very confusing!  Keep in mind this is only the Haines line. 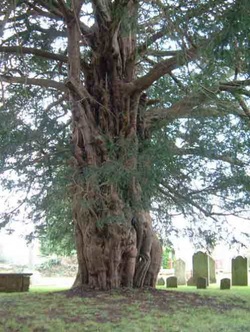 "Endogamy is the practice of marrying within a specific social group, caste or ethnic group, rejecting those from others as unsuitable for marriage or other close personal relationships."

We are of course much more than just descendants of the original Haines family members to arrive from England, seeking freedom from the oppressive British government over those who shunned the Church of England.  It turns out I'm descended from at least:


Some of the mix can be traced to one couple who wed in 1776, Josiah Haines and Rebecca Austin.  Each one of them had one or more of the surnames Haines, Borton, Austin and Sharp in their own family trees.  Their marriage created our one line from them.

There could be more surnames involved here where we have more than one ancestor.  The Matlack family for example, the progenitor was William Matlack (first generation in America), five of his and wife Mary Hancock's nine children married a Haines.

It all sounds very confusing, and it sure is, but I hope to shed some light first through the descriptions from two historians (excerpts below) and by my own charts that I've made.   So if you are really curious to see how it all fits, keep going down for the charts.  And don't worry, there was no direct incest going on!

Following is an excerpt from the book: The Sharp Family In Southern New Jersey Since 1682, by Albert Stirling Adams.   If you want to see each of their pedigree charts, they're at the bottom.

The Haines Family and the Sharp Family merrily intermarried in early Burlington County.  Witness the above marriages of Ann Haines (2-57) to John Sharp (2-56), and Amos Sharp (3-89) to Deborah Haines (3-90).  In a letter to me, dated 29 Jan 1981, John W Haines, author of the two-volume "Richard Haines and His Descendants," wrote "In the early days (of Burlington County) the Sharp Family and the Haines Families were the two largest in Medford, New Jersey, Evesham Township.   This fact helps to explain the many intermarriages between the two Families.

The Haines Family (spelled variously: Haynes, Hays, etc.) had as progenitor in America, Richard Haines.  Richard and his wife Margaret, lived in "Aynhoe of ye Hills," Northampton, England, with their family, including four of their six children, sailed from Downs, England, in the ship "Amity," Richard Diamond's ship, on 23 Apr 1682. Richard Haynes became ill and died before they reached America. Joseph the fifth son (sixth child) was born on the voyage over. John, the oldest son, had come two years ealier and lived in a cave in "Haines" bank, below Lumberton, N.J., on the south branch of the Rancocas Creek.  The family landed in Burlington in the fall of 1682, at nearly the same time that John, Hugh and William Sharp landed at the same place.

Excerpt from Quaker History, Vols VII and VIII, regarding marriage among cousins:

London Yearly Meeting in 1675 prohibited the marriage of first cousins, and while the same rule held among American Friends, the records show that it was frequently violated.  English Friends in 1709 prohibited the marriage of second cousins, but the reiteration of this rule in 1747, 1749, 1801 and 1833 indicates that it must have been not unfrequently violated.  In 1833, in spite of some strong opposition, the restriction against the marriage of first cousins (and consequently of second cousins) was removed, though such marriages were strongly discouraged.  In 1906 London Yearly Meeting adopted a Minute allowing any marriage which the law sanctioned, and that is the rule which governs at present.  In America the marriage of first cousins has always been discouraged by Friends and for many years forbidden by some, if not all, the Yearly Meetings.  In most Yearly Meetings, by such a marriage membership in the Society was thereby relinquished, though it was customary to issue a "Testimony of Disownment" so as to make a record of the fact on the Society's books.  As most Meetings would receive such delinquents back again if proper acknowledgments were made, such marriages did take place.  Indeed, so often were such acknowledgments made and received, that special "advices" were issued advising Friends to be careful not to receive acknowledgments too readily.

I tried very hard to make a very confusing lineage as simple as possible.  As it turns out, it's not simple at all!  But I hope this helps somewhat to convey how this couple were related.

They were of course "disowned" but as you can see in the excerpt above, it was a fairly common practice.  I can find no evidence that they were accepted back into the Friends as voting members but it's fairly certain they were not shunned by their families or friends, indeed probably not by the Quakers themselves.

On the charts below, the bold italic under the names referring to which grandparent it is, refers to as in relationship to me. 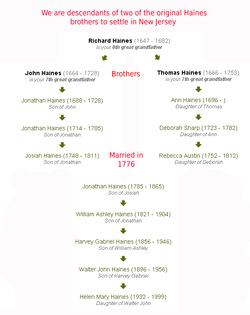 John and Thomas were brothers, sons of Richard Haines and Margaret Leeds. 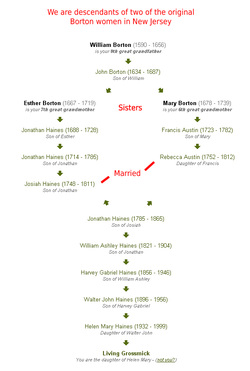 Mary and Esther were sisters, daughters of John Borton and Ann Kinton. 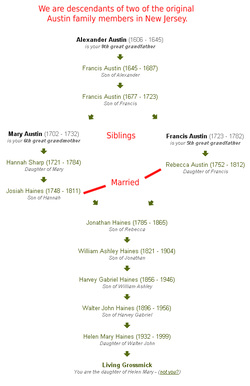 Francis II, Mary and Elizabeth Austin were siblings, children of Francis Austin I and Mary Borton (again above) 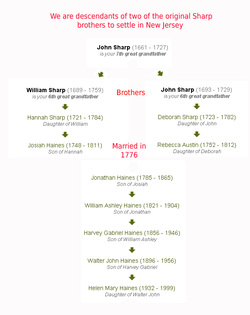