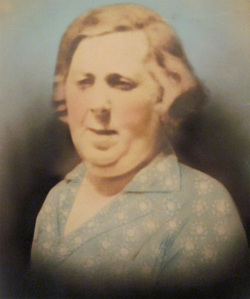 Undated portrait of Ruth Lenore Townsend Haines
Called Mother by all of her children and subsequent grandchildren.  She married Walter John Haines and had eleven children, one of which was my mom.

See Walter and Ruth's page for their info.

Below is what little I have been able to find about her ancestors.  I don't believe any of them were Quakers.  Quakers of course kept great records and the genealogy of West Jersey Quakers has been extensively researched.  So they were relatively easy!  Unfortunately not so for Ruth's side of the family.

I am still searching for more on her side of the family and when or if I find anything new, I will post it here. 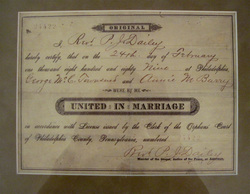 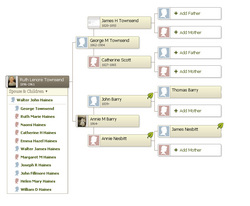 George was the son of James H Townsend, of Virginia, and Catherine Scott, from Maryland (I believe).   James was born about 1820 and was Pennsylvania when their first son was born, William.  The family subsequently moved to New Jersey and the rest of the children were born - James E., Sara, Kate and our George.

One year before George was born, James was among a group of volunteers in Camden who were mustered in 4th Regiment New Jersey Volunteer Infantry - the unit was mustered in for a 3 month term during the Civil War.

George's mother Catherine died in 1865 and his father married Elizabeth Hughes.  Two other daughters arrive - Mabel and Lillie.  (I'm not sure whether they are natural daughters of James and Elizabeth or adopted). 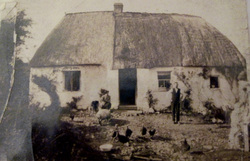 Their home in Ireland
Annie was born on 27 Feb 1864 in Belfast, County Antrim, Ireland (now Northern Ireland). Her parents were Jonathan Barry and Ann Nesbitt. She came to America in either 1875, at 15, or 1885 at 21 years old, as written on the census.  This could be a transcription error.  (I am still trying to sort this out.)  In any case, I have no doubt she was one of the vast wave of young Irish girls / women escaping poverty in Ireland for the hope of a better life in America.  Apparently Annie's family was Catholic in a predominantly Protestant area.  We all know what happens later in that country.

Annie's parents married on 6 July 1858 in Down, County Down, Ireland.  I find one other child from this union, Catherine Elizabeth Barry, born in 1866.

I remember being told as a child that we also had Scottish blood in our family from my mother's side.  I'm not sure whether my mom was referring to the Barry name, which originally was from Scottland (invading Ireland), or from George's side.  The McClennon name is perhaps either Scottish or Irish.  (still looking for that as well). 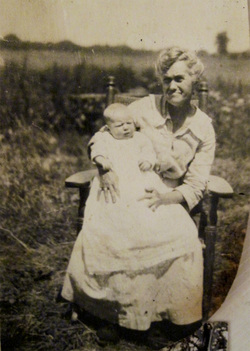 I had never heard from my mother or her sisters that her family was religious in any way.  My mother had sent the six of us to Sunday School when we were small but I always that was just to get her out of her hair for a morning!  I was very surprised to find out from Janet that Ruth's family was Catholic.  I know that in October of 1951, Ruth, as a Gold Star Mother, was a guest at the St Anthony of Padua dinner to be held in their honor.

After George's death in 1904, Annie and her two children moved in with John Everingham and his children.  I don't know what happened to John's wife, but Annie was listed on the first censuses with John's family as a housekeeper.  On the last one before her death, she was listed as his wife.  I don't believe they ever married however.

Janet explained that Ruth declared she was "done with the Catholics' because of the church refusing to allow two people to be buried together.  I am assuming this is referring to Annie and John Everingham.