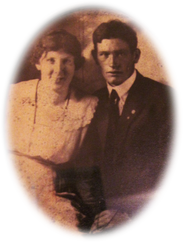 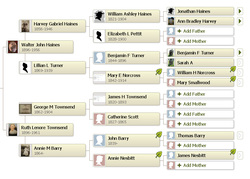 Walter & Ruth's Tree
Click this and all images to enlarge the view.

As you can see, I'm still working on some parts of their tree.  And some, as in the Haines line, goes far beyond what you see!

Walter was one of 11 children, the fourth child and second son, born to Harvey G Haines and Lillian L Turner in March of 1896 at Eayrestown, New Jersey.  Although not well off, Harvey and Lillian seem like they were loving parents who took care of family members in need, taking in several nieces during different time periods, even adopting two girls later on.

In 1900, when Walter was 4 years old, the family lived in Medford, Burlington County, New Jersey, with his father working as a day laborer who had been out of work for 6 months.   His grandfather William A Haines, a widower, was also living with the family.  It's hard to imagine how they got by.   Walter went to work at 14 years old, maybe sooner, working as a farm hand with his father.

At 21 years old and still single, he did what was required of every male in the United States in June of 1917, he registered for the draft.  His hometown was recorded as Moorestown and he reported that he work as a farm laborer for Frank Wixted in Hartford, NJ.  He did not go to war however because he had "one finger off at first joint of right hand." 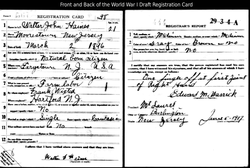 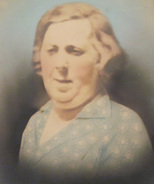 It has been reported on census records that Annie gave birth for four children total but only two survived, Ruth and her brother George MC Townsend.

The family moved around, even at one time living in Manhattan, New York City, where George Sr was employed as a steamfitter.

Her father died shortly before Christmas (16 Dec 1904) at 42 years old, leaving his wife Annie with two young children (Ruth, 8 and George, 9) and little means to care for them or herself.  Both children were sent to the Camden Home for Friendless Children and are listed there on the New Jersey State Census, 1905.  This census has George's age incorrect.  I am unsure how long the children were "inmates" there.

Ruth's mother Annie moved around apparently trying to find work and support.  She eventually moved in with John Everingham and his three children in Camden as a boarder and housekeeper.  I can find no record of a marriage for Annie and John but I do know they ended up together.  My grandmother Ruth was heard to complain when her mother died that the Catholic church would not allow Annie to be buried next to John.  She also said she would no longer be Catholic because of that.  None of her children practiced the Catholic faith that I am aware of.

Ruth's brother George M Townsend became a fireman of some note with the Camden Fire Department.

Registration of Annie Barry's birth in Belfast in 1864. Annie was Ruth's mother. The address of the house is 19 California Close in Belfast. 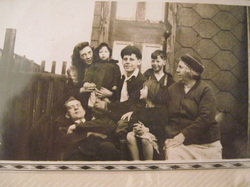 Mother & some of the kids
Ruth and Walter married in the second half of 1917.  At first they lived on a farm next to her mother Annie and John Everyingham in Moorestown.  By 1930 the family was living in Mount Laurel, and eventually moved to Tyler Avenue in the Cramer Hill section of Camden.

Ruth had a son prior to their marriage, George Townsend, who was 4 years old when they wed.  Eventually the couple had 10 children together, a total of 11.
Sadly, they lived to see the loss of two of their sons, one to World War II (Walter "Sonny") and one who drowned in the Delaware River at 22 years old during an epileptic seizure (Jack). My mother remembers her mom telling him not to go swimming that day because of recent seizures he had been having.

All of her children called her "Mother" and my cousins who remember her still do.  Apparently Walter was the soft one in the family and Ruth was the disciplinarinarian of the household.

In later years, Ruth developed cancer on her nose and had to have it removed.

Their Children - Our Parents

Their sons all passed away first and left six sisters, the ones we lovingly referred to as "The Aunts."  The last one, Aunt Milly, passed away in 2009.  We continue to love and miss you all and wish you peace in your rest.
Note:  These are reported to me by my sister Helen Grossmick Flynn.  The information had been recorded by Aunt Hazel.  The names in quotation marks are the names they went by all their lives and have on record.