His parents, Josiah and Rebecca Haines, had a total of 11 children, 10 of them boys.  Jonathan was the fifth child.  His parents were members of The Society of Friends, more commonly called Quakers.  According to the Evesham Monthly Meeting minutes of the Friends, it was recorded on 5 Feb 1776 (Feb was the 12th month at the time) that Josiah Haines, Jonathan's father, was "disowned for marriage with one too close in kin."   I can find no reference to whether Josiah and Rebecca remained in the Friends or not, but I know they could have had they wished.

It's unknown to me how many siblings Ann had but I know she's the daughter of Gabriel B Harvey and Sarah Ashley.  Ann's name is recorded at birth as Ann Bradley Harvey so her father's middle initial of B could very well stand for Bradley.  She was born in Salem, also to a Quaker family.  Her mother was born in England and died in Salem, New Jersey at 31 years of age, when Ann was just 7.  I don't know if her mother remarried (as was common).  Ann's grandson and my great grandfather, Harvey G Haines (born Gabriel Harvey Haines) was named in honor of her father. 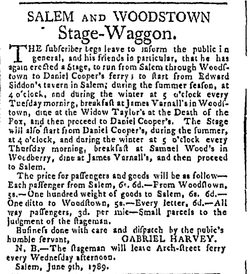 17 Sep 1789 Philadelphia Mercury
Ann's father ran a stage-wagon service from Salem, NJ to Cooper's Ferry (Camden) which also stopped at Woodstown, a distance of approximately 50 miles.  Each way the stage would stop twice each way to eat.

Gabriel's advertisement appeared in the Philadelphia Mercury every other Thursday between July 1789 and October 1789.  At left is the Thursday, 17 Sep 1798 advertisement (Issure 445, Page 1).

Married in Salem, New Jersey on 3 Aug 1809, they had seven children. The family settled in Medford  where Jonathan was a farmer.  They lived there many years, many of their neighbors being close and extended family.  Jonathan died in about 1865 at about 80, and Ann died on 6 Jul 1869 at age 82. 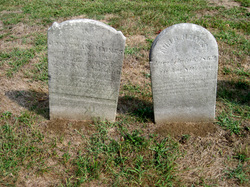 They had seven children: