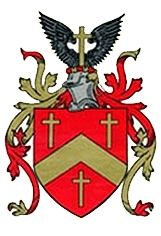 Both Francis and Mary were born in Horsemonden, Kent, England, and immigrated to America.  Francis came with his sister Elizabeth in 1688 and Mary with her parents and siblings in They married in 1679.  They married in Jul of 1696 at the Haddonfield Meeting House.  Land Records: 24 Dec 1688 Francis Austin of Burlington purchased from John Antram fifty acres on Birch Creek.  He bought another fifty acres adjoining this land from Percival Towle on May 3, 1689.  On 1 Nov 1694 he sold the one hundred acres to Thomas Scattergood Jr. On 24 December 1688, Francis Austin bought 50 acres on Birch Creek.   Francis owned 350 acres in Evesham, Burlington Co., NJ.

Francis' Will:   "Oosten, Austin, Frances, of Evesham Township, Burlington Co.;  will of.  (Being very fol of pain of Bodey).  Wife Mary.  Children--Amos, William, Jonathan, Mary, Elezebath, Sarrah, Ane, Hannah and Martha.  Home farm on North side of the Mire Roon, adjoining Richard Hains, land on both sides of Massons Kirk.  Personal property.  The wife sole executrix 'to pay or cas to be payed all my debts and Lagoes,' with John Hains and William Evens as assistants.  Witnesses--Hannah Haines, Jarves Stockdell, Maredeth Johns.  Proved July 30, 1723.  Inventory of the personal estate, L280.-;  made by John Sharp and Thomas Wilkins."

They had ten children, the last of which, our ancestor Francis III, was born after the death of Francis II.

They had then children: